Maryland Attorney General Douglas F. Gansler announced last Thursday that his office, together with the Federal government, has entered into a $960 million mortgage servicing settlement with the nation’s five largest mortgage servicers.

The $960 million settlement for Maryland’s distressed homeowners is broken down into the following: 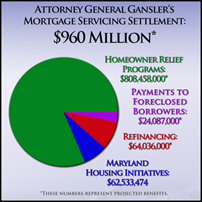 The Maryland Attorney General, in a press statement, said that the settlement money will be specifically used for:

The close to $1 billion settlement for Maryland’s distressed homeowners is part of the $25 billion agreement entered into by the federal government, 49 state attorneys and the nation’s five largest mortgage servicers.

U.S. Attorney General Eric Holder, in a press statement, said, “This agreement–the largest joint federal-state settlement ever obtained–is the result of unprecedented coordination among enforcement agencies throughout the government.”

Attorney General Holder added, “It holds mortgage servicers accountable for abusive practices and requires them to commit more than $20 billion towards financial relief for consumers. As a result, struggling homeowners throughout the country will benefit from reduced principals and refinancing of their loans.”

Meanwhile, Maryland Attorney General said, “The settlement will help thousands of Marylanders stay in their homes through enhanced loan modifications and other services. It also requires comprehensive reform of mortgage loan servicing standards, changing the way these banks will deal with customers in the future.”

Maryland Attorney General added that the settlement “does not release the banks from criminal liability.”

“It does not prevent individuals from bringing their own claims. And it will not stop our office from pursuing the banks over misconduct in the securitization of mortgages, fair lending violations, or other fraud. People should expect to see further action,” Maryland Attorney General further said.